Auris Prediction: NDP is giving a Tough Fight to the PCs!

Our social listening-based analysis of the Ontario elections is finally drawing to a close. In the run up to E-day on June 7th, 2018, Ontarians have decidedly moved away from Liberals. There is no buzz whatsoever, leave aside a handful of ridings. Here is what it looks like to us:

Our predictions for some of the ridings where we see a decisive buzz indicates the following:

Riding by riding details are below:

Election buzz by 1st week of June 2018 from Ravi Jain

The fight is close and NDP has greater momentum. PC have legacy and a core voter base. We’d know whether Andrea Horwath edges past Doug Ford to become the premier of the state. Or perhaps, Doug Ford shows resilience and makes it past her.

In our last analysis we showed how the perceptions and responses of Ontarians were changing over the past few weeks, as seen from the lens of the PC Party.

Here’s our latest analysis and we see some dramatic shifts happening at the ground level (and as it manifests in the buzz online).

The buzz shows that the NDP and PC Party are head-on-head, with the latter leading in terms of positive buzz.

Here are the latest trends by riding. The missing ridings are those where we did not see much chatter.

We put Auris, our AI based consumer insights engine to the task of identifying key issues which people are discussing in each riding of Ontario. We wanted to monitor how the issues people talk about change in the run up to the elections in June. We picked the PC Party as the anchor (we view the data from the lens of this party) because they seem to be leading as per the latest polls.

Some great insights emerge about a) what really matters to people, b) what messages resonate more and c) what issues concern them. These are changing over time . We will showcase what we see by analyzing the data which is already out there.

Not all ridings are abuzz on social platforms, so you’d find those ridings missing in here. Note that most of the chatter is on Twitter, though there’s chatter on Facebook pages as well as forums. Auris ingests all of the chatter and churns out relevant insights. 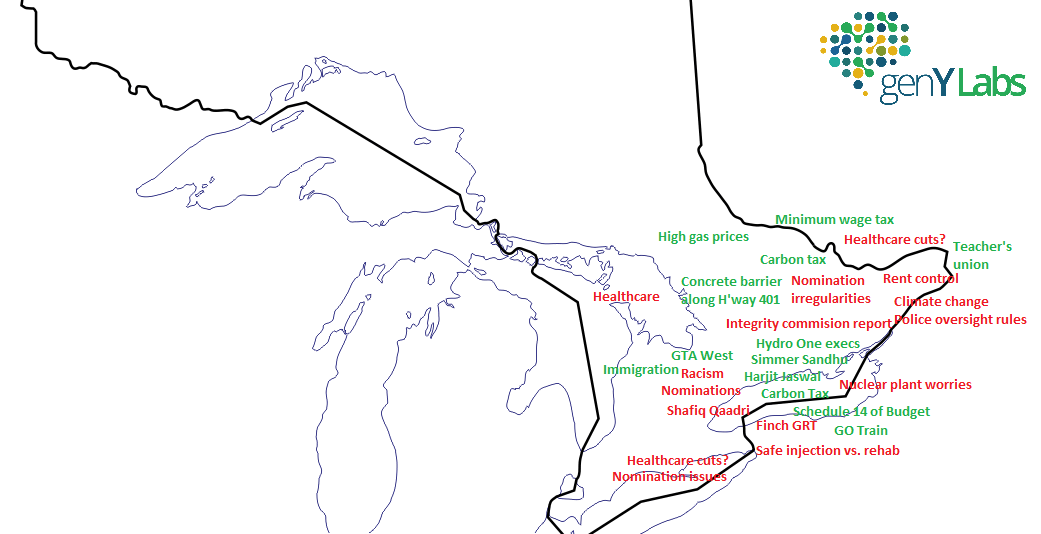 A visual showing the issues by riding for the two weeks is shown here. This helps visualize the issues and their relative importance. 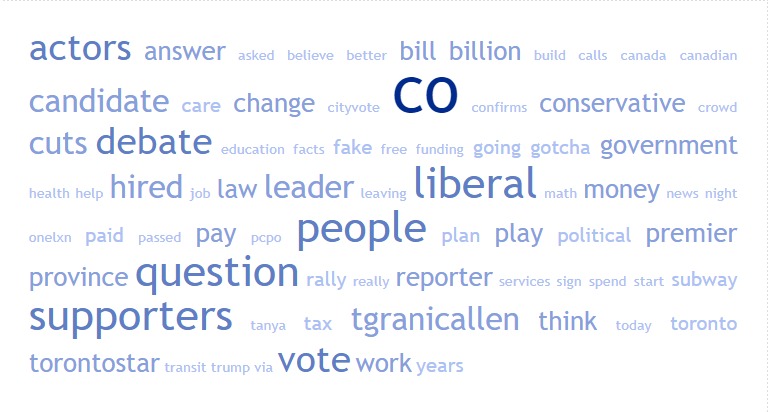