Tracking the Buzz around Met Gala 2019

One of the most awaited events of the year – the Met Gala is considered the Oscars of fashion by many. Held every year on the first Monday of May, it’s the opening ceremony of Costume Institute’s annual fashion exhibit. This fundraiser’s financial collection gets donated. Every year’s event is marked by a theme.

Following last year’s theme “Heavenly Bodies: Fashion and the Catholic Imagination”, 2019 put forth an unusual theme. This year’s theme “Camp: notes on fashion” drew inspiration from Susan Sontag’s essay on “Camp” which talks about the love of unnatural, artifice and exaggeration.

The event is hugely followed on social media and is hit among the Twitterati and we decided to check on the buzz.

This year’s Met Gala event received over 40000 mentions and over a billion impressions. Met Gala 2019 – the 71st edition of the event, was chaired by Lady Gaga, Harry Styles, Serena Williams, and Allesandro Michele.

Comments with positive sentiment show how well the theme and the fashion parade were received by the many followers on social media.

Besides the positive responses, people also expressed their opinions about the outfits and the celebrities who they felt did not present themselves quite well. Ashley Graham was judged to be among the worst dressed at the event, according to the Twitterati.

Besides directly critiquing the celebrities, some took to posting memes related to the costumes and the celebrities wearing them. Celebrities were compared to characters from the kids’ cartoon Pokemon (short for Pocket Monsters) to inanimate objects.

Celebrities and influencers from around the world were very invested in the whole affair. The top 5 influencer profiles to have mentioned Met Gala in their posts were:

Kim Kardashian West with an influencer score of 92.

Deepika Padukone and Priyanka Chopra Jonas both with an influencer score of 88.

Forbes with an influencer score of 86.

Idris Elba with an influencer score of 78

Take a look at the word cloud below for the buzz words discussed the most. During our analysis and our day-to-day monitoring of the event, we saw shifts in the word cloud. Lady Gaga was extensively discussed on some days while it was Harry Styles on other days. Overall, the most talked about are these: 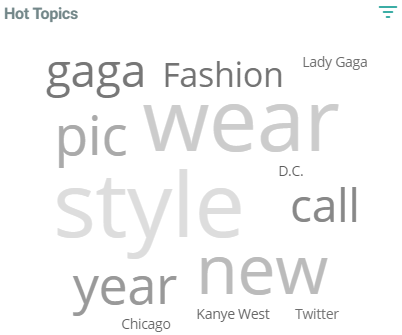 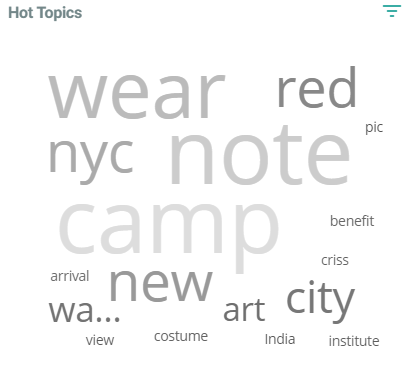 Met Gala 2019 has been quite successful when it comes to grabbing attention on social media. Social listening into the conversation threads around Met Gala 2019 gave us a look-see into the closets of many celebrities. Hopefully, the fashion brands would get design cues by listening to the chatter about what defined the best and worst dresses.